If you ever struggled trying to find that one overly-specific replacement part, or had a project you wanted to bring to life, or even an idea about a personalized gift, then having a 3D printer might have come in handy. Over the past few years, 3D printers have become an affordable inversion that can be used to achieve multiple goals. From saving you money by 3D printing things you might ordinarily buy, to actually being a potential source of income, the possibilities with a 3D printer are endless.

What is even better, creating 3D objects on demand requires no additional machining or special tools, which allows you to create as many items as you need with minimal effort. You can use a 3D modeling software of choice and design it yourself, or search for the STL file of that specific model you want on the many websites that host 3D works.

By having your own 3D printer, you have a say on the quality of the finished product. In order to achieve that fine finished look you want, the number of layers should be higher to avoid creases. The speed with which the material is released from the nozzle also determines the definition of the print. Both of these are things that make the printing process slower, so be mindful of this.

A printer that has become popular in the past years is the FlashForge Creator Pro. This model has a customizable option that allows you to adjust the layer thickness on a range from 0.1 mm to 0.3 mm, which are really good numbers and — according to most reviews — is able to produce high quality 3D prints to perfection, though they take an average of six hours to print.

Regarding the nozzles, it’s been noted that they need to be replaced after some time, and that they tend to get unbalanced which might cause uneven prints. This can be easily solved by removing the extruders and rebalancing the nozzles.

The FlashForge Creator Pro is compatible with many materials, something that also plays an important role in what the finished product will look like. Low-quality plastic will make the finished print look cheaper and not as sturdy as other materials. 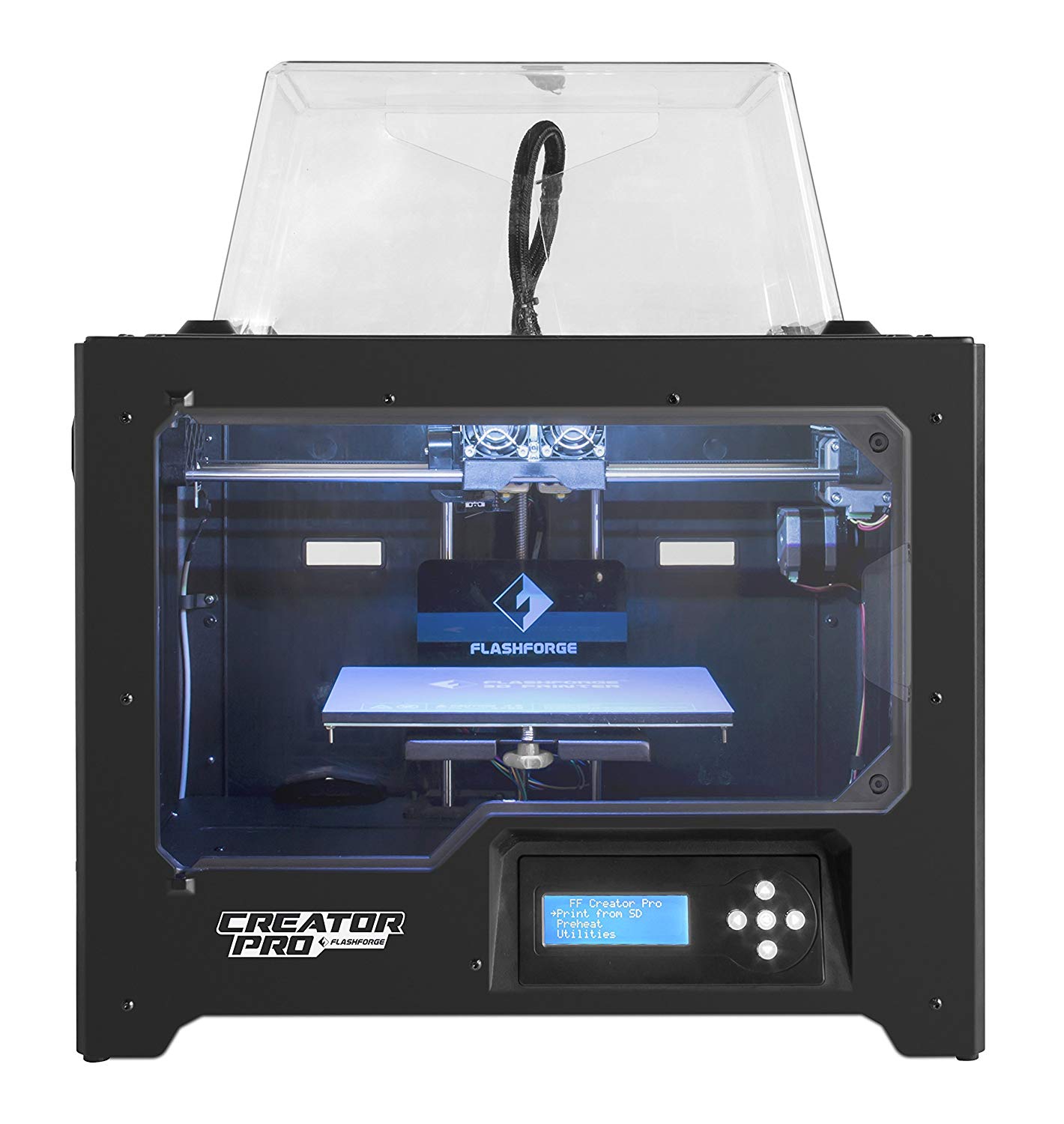 This new version has a dual extruder design, which means you can print with two different types of filament or two different colors.

Some other changes the company has made in comparison to older models, is that the new Creator comes with a sturdy metal frame, in exchange of the original wood frame they used to have.

It also has metal platforms, while older models had plastic platforms. This new addition allows them to better support the heat, and avoids them from bending because of high temperatures.

However, regarding the platform some commented that one of the biggest issues when setting up the printer is getting the plate to level properly, a task of utmost importance for even prints.

Others commented the exact opposite, and complained about the finished product getting sometimes stuck to the print surface, which resulted in pulling on the printed piece and the subsequent risk of damaging or breaking it. Some recommended applying hairspray to the surface before printing, which allows for an easy detaching of the finished print.

It’s been said, too, that the printer is loud. Between the door rattling during printing, the noise of the motors and the cooling fans, it’s far from a discreet machine.

Other complains are about the included software. Some have said that they get better results using other software with more extensive options.

But for those who are trying a 3D printer for the first time, it’s been said that this model is extremely easy to use. It takes some time of changing preferences and adjustable options, but once that’s done the process is very straight-forward. Other than that, the nozzles will have to be removed every once in a while, to take out the broken pieces of plastic that clog it, but it’s a simple task.

However, others commented that this printer might be more effective for intermediate enthusiasts, instead of beginners, since it’s a high-end printer and experienced users will be able to explore better the many things it has to offer.

With beginners, most problems will appear when changing filament types, adjusting the temperatures involved, rafts, walls, and dual extruders. But, the FlashForge and the 3D printing community in general is great, and always willing to help and give advice. So, to anyone willing to learn, getting the best results is not a matter of experience but of trial and error—and asking for help, as well.

The FlashForge Creator Pro printer can be used connected to a computer via USB, or by inserting a flash card with the desired STL file. The advantage of using the latter is not needing to have a computer hooked up to the printer during the whole printing process. For longer projects, the addition of the SD card to the design is amazing.

In conclusion, this printer hasn’t presented major issues to its users, but it can be somewhat tricky to set up. Adjusting the options and preferences will take some time, and in the meanwhile some of the printed pieces might be defective.

However, you shouldn’t let this discourage you. 3D printing requires a certain level of knowledge, and you will need some time to become good at it. After going through the initial learning curve, you will be able to apply your new skills and build those projects you had in mind. There’s no limit to creativity!

Do you have some thoughts on this content? Come chat about it on Discord. If you enjoy the content check out ways you can support the site.
MrPowerScripts is a participant in the Amazon Services LLC Associates Program, an affiliate advertising program designed to provide a means for sites to earn advertising fees by advertising and linking to amazon.com.

Suggested posts for you